I’ve tried both Bookworm and Voyant just to be sure that I was using properly this kind of tools.

My first idea was to look at several kind of words related to the gender (female/woman/girl/wife) in correlation with sexuality (sex/love/candor/prude/licentious/libertine/womanizer) and deviance (the idea came up thinking to Freud’s works and Bleuler who invented the word “schizophrenia”, for a long time these words and the female gender were related one to each other.) but I was not very sure of how I could do that.

So I chose a topic: I was curious about how much female characters in Literature were linked to words belonged to psychiatric or sexual deviances, and my first thought was to the Gothic productions, on published books between 1890 and 1920. I used Dracula by Bram Stoker, where the main female character has a very strong fascination to a misterious sexuality (in a great struggle because of the pruderie of the time).

I know, it’s not a very happy topic, but I thought it was cool to understand with a computer analysis which kind of words were used most!

I’ve tried with Voyant but I was not so much satisfied. I don’t know if I’ve did wrong, I want the system could let us to choose the words to analyze or to put some words in correlation, but the results were not very interesting (they just confirm to me something that I already know about the book).

The system analyze Dracula and found, of course, al lot of verbs but in particular a great use of “SHALL”. Lucy was nominated 225 times while the name Dracula appeared 188 times (probably because it’s like Voldemort, “you don’t have to say his name, he’s a monster!”). I chose several words for an analysis: 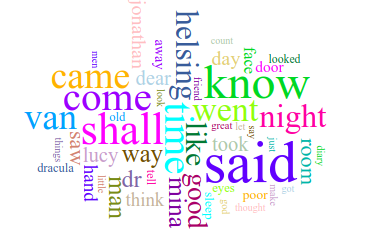 After many experiments I decided to not use my first idea (I have to learn better how to use this tools) and I’ve tried just with Dracula. So, we have eyes + Dracula + face. In this segment you could find Lucy and Mina going up and down, in a sort of dance.

So I thought “ok, and Bookworm?”. I thought this second tool could be more interesting, but maybe the topic was perfectible 🙂 In this case I just put “sex” and “schizophrenia” in a limited time (1890-1910), just to look at the number of books that used this words in the same period in which Stoker wrote his novel.

Guys, they wrote a lot about sex:

Unfortunately I have no idea of which kind of books Bookworm analyze, or with what criteria so it could be everything: medical books (and it’s ok), novels? – and it’s not so common, etc.