Are Video Games redefining what the humanities mean to us? Could every game be considered a digital humanities project, by the stance of how it is produced and how it is received? This is a look at how digital methods that are performed by digital humanists are used for the production of this medium

By looking at the ways video games engage in the digital practices that DH performs, we can see how they are a part but yet not a part of the digital humanities or the humanities for that matter. By looking at the production of games and looking at the different media that exist within it, one can dissect each facet of the game and discover how it relates to DH. But… the impact it is where we see an extension of a game being communicated about in many technological forms from videos to online forums. This is a look on how people engage with games, break down the construction of them, and how it contributes to the society that we are in.

This chapter is about the relationship between game and player and the communication that happens between that party. Communication could be the information being transferred through button presses and visual response of those presses, or omitted input. The way that the player communicates with the game, give the game information of what the player is doing and how the player is doing in the game. However this piece also brings up communication in multiplayer games as player identifies with this avatar and can interact with other players via the avatar’s actions or actual messages. This is the side effect of immersion that players as they see themselves as the avatar on the screen.

A small paper relating how video games affect young students in their studies, but allow them to delved in digital literacy, a sort of consequence after playing games where it allows discourse between the players and the games. Steinkuehler is asking what the relationship between literacy and video games is, where he goes on to say that video gameplay is a form of digital literacy. I am using this piece to connect the lines of what one of the consequence of video games as a medium of pop culture can have with a pedagogical lens. However he goes on to point out how video games have a strong mutual relationship as many fans or consumers express their reaction to each game on discussion board, fan fictions, and the like.

This is a discussion of what art means and the aesthetics that we hold for art in general. He believes that finding relational properties instead of intrinsic ones will allow us to regard something as a work of art. He takes a philosophical lens of aesthetics and looks at the ludology as well as the narratology of games to determine their place as artworks. I plan to use this piece to show the thought process of how video games can be seen and how it cannot be categorized simply as an artwork because of the variables that come in producing certain games. Each game has its own genre, world, narrative, limitations and boundaries, and how all those things express themselves in a form of game is what brings my question to surface.

Dr. Murray uses games for a pedagogical practice, using Rome: Total War for her students to display an understanding of ancient war. The process of doing this allowed a sort of immersion within the idea of ancient war and presented the idea of how to engage with this idea. This is a text of how pedagogical practices become different when implementing video games; a facet that digital humanities mainly implement within the projects that are developed. Murray allowed the students to control their own learning environment by letting them set up customized battles where there are choices such as geographical locations, factions, the amount of troops and their disposition on the battlefield.  This presents a clear understanding of how video games can assist in the classroom and ultimately pedagogical environments.

The idea of how digital humanities have everted where there is now a connection between the digital world and physical world. Around 2006, there have been prominent technological advances, as well as the sudden acknowledgement of digital humanities. The attention towards new media has been refined towards fully acknowledging video games and video game theories. These practices allowed helped pushed digital humanities towards eversion. This recognize video games as one of the most prominent forms of new media under a digital humanist context, showing the bridge that this medium brings into scholarship.  How they structure relationships between the data and the player, or the data and the actual game to even going through this term “gamification” which is employing gameplay attributes to things that aren’t a game. E.g. A leaderboard in an exercise application.

“What does it mean to include new media- let alone digital games- in a discussion about the digital humanities?” Jagoda argues that games require new ways of perceiving and working, as they promote this pro social behavior to where players can perceive problems differently. She goes through the idea of gamification where games become capitalized, even though at its core, games does use modes of intellects that would be found in the humanities. She also break down how games made, and affect the players playing them from the multiple learning styles to the ways that the games engage them.

This piece is an interview with Chris Melissinos about his exhibition The Art of Video Games that was curated for the Smithsonian Art Museum. The exhibition was presenting games as an art form and not just the art that is used to conceptualize the game. The understanding of trying to find an intent or to interpret meaning from video games when Melissinos brings up how people can play games differently. Players can understand the intent of a game from the director, but can always grasp some meaning from their subjective background making a game be placed in between these ideas. Though the perceiving of games as art is taking the entire content including the code and seeing the humanity inside it.

This piece speaks on how game culture spans out across different mediums that primarily lie on an online space such as wikis, walkthroughs, hints and so on and the controversies that lives on those spaces. It also touches upon the rhetoric of how games are experienced and how they should be critiqued for the language and representation of people, places, and things. It explores games in different facets that would help create an understanding for digital humanists, by expressing a balance of between technology and humanistic thought. Games are flexible tools that can either be studied separately or integrated in a curriculum.

Sandifer breaks down video games components from the controllers that are used to the actual character on the screen. An avatari is an avatar (or controlled character) that experience something that the player wouldn’t want to happen. Sandifer express the different forms of an avatar and the complexities they have due to the generational expanse of technology such as how a controller currently have more buttons and joysticks compared to Super Nintendo controller that had a directional button pad and four buttons. This paper looks at video games and analyze just the practical forms of how it operates and what the player is experiencing. Sandifer argues that if a game creates a virtual world, then it is not a medium, which I find interesting for my research. If it isn’t a medium, could there be another way to quantify video games within the sphere of digital humanities than just referring it as new media?

This article is a funny critique about how there is an online community of gamers that persist in game culture through video. While I didn’t think I would get anything substantial about it, I found that in a way it’s a type of pedagogy being done in a unique type of way. While this piece is a small comparison between generations and how active they was, it also show the activeness of game culture, which made me consider my claim of games redefining the humanities as we know it. But the humanities interact with people on a social level, as it is always a reflection of on the subjectivity of the creator as they detail the environment that surrounds them. This however shows what happen when people who witness a creator work and their response to it.

So my data set to test out Voyant was 215 instruction booklets from a collection of Nintendo 64 games, I thought it would be a fun and interesting exploration to see what would be of importance. I didn’t know what to expect when trying this, but after seeing the results, I gained an understanding that theses instruction booklets held two different “narratives”. 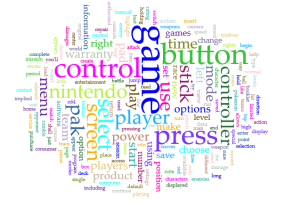 The thought process I had that sparked this idea, was how would video games reflect our society in very practical ways? I looked at instruction booklets as they can be seen as the bridge that connects the player to the game itself(if they decide to read the booklet first, of course). So the words that are frequent within these text all correspond to usage of a controller, which I was prepared for so I wanted to look deeper at words that aren’t as frequent but have some importance. In the visualization above, the words that are closer to the center, are words that matter to the actual game, but as you look farther away, the words that appear are more of  a legalized form of writing. For example, the word player/s and consumer are both showing up the corpus which  would determine the same entity. But player/s are more frequently used than consumers, and this can lead to the question: why?  The usage of language is important in all texts, and voyant gives us the clear understanding that the text surrounding the the center  holds just as much importance as the words in the center. There’s a narrative for the players on how to play a game, but there is also a narrative for the company to handle all legality in dealing with their property(the games themselves).

If I were to proceed with this experiment, I would perhaps take a corpus of instruction booklets from other companies and compare and even expand my view towards the modern day. While this was a simple observation, it does open new discoveries on how text is formed and what that can mean to the readers in question.